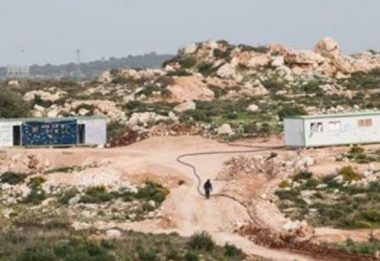 Israeli settlers, Monday, set up a mobile home on a plot of land belonging to the southern West Bank village of Tuqu, east of Bethlehem, said a local activist.

Head of the Bethlehem Office of the Anti-Wall and Settlement Commission, Hassan Breijieh, told WAFA that a group of settlers stormed a 200-dunam tract of land, located to the east of the village, and set up a mobile home, aiming to establish an outpost under the protection of Israeli forces.

He added that Palestinian landowners fended off the settlers’ attempt to seize their land and produced their title deeds.

Meanwhile, settlers dropped leaflets warning Palestinian villagers against dealing with human rights and anti-settlement activists in Janatah town, to the southeast of Bethlehem.

Security source and eyewitnesses said that the leaflets were dropped on Palestinian lands in Um al-Natour area.

Al-Zeer said that the leaflets were dropped after Palestinian villagers recently fended off a settler attempt to seize Palestinian lands adjacent to the illegal Israeli settlement of Sde Bar.

The number of settlers living in Jewish-only settlements across occupied East Jerusalem and the West Bank, in violation of international law, has jumped to 834,000, and settlement expansion has tripled since the signing of Oslo Accords, in 1993.