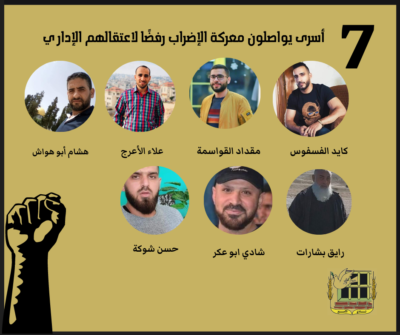 The Palestinian Prisoners’ Society (PPS) has reported that seven political prisoners, held by Israel under the arbitrary Administrative Detention orders, without charges or trial, are ongoing with the hunger strike, including two who started the strike more than two months ago.

The PPS said one of the detainees, Hasan Shouka, started the strike eight days ago; he turned himself in to the army, on September 14, after the soldiers invaded his home and abducted his wife Sharihan Shouka, 33, as an act of collective punishment.

It is worth mentioning that Hasan Shouka is a former political prisoner who was held by Israel for more than 13 years.

Hasan was only released from prison three months ago, after spending 20 months in captivity, however, not long after his release, the soldiers started invading and ransacking his home while trying to abduct him.

In addition, Kayed al-Fasfous and Miqdad al-Qawasma are facing seriously deteriorating health conditions but are ongoing with the hunger strike they started two months ago.

The PPS stated that Israel continues to ignore the legitimate demands of the detainees by keeping them imprisoned under the Administrative Detention orders without charges or trial.

It is worth mentioning that al-Qawasma is at the Kaplan Israeli medical center, Al-A’raj, Abu Hawwash, and Bisharat are in the infamous Ramla prison colonic, while Abu Aker and Shouka are in solitary confinement in Ofer Israeli prison.

Approximately 520 Palestinian detainees are held by Israel under the illegal Administrative Detention orders.

The number of Palestinian detainees in Israeli prisons is more than 4850, including 41 women and 225 children.