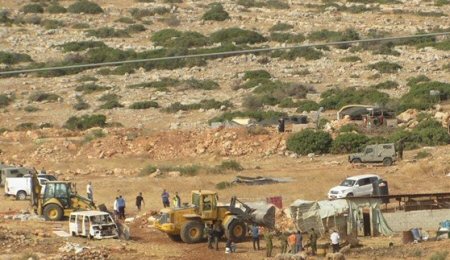 Israeli bulldozers demolished seven structures and animal barns in the village of Bardala, in the northern Jordan Valley, on Thursday.

WAFA reported that the seven demolished structures belong to a Palestinian identified as Khalid Sawafta.

The demolished structures include three animal barns, a residential structure and three tents.

According to Ma’an News Agency, the Jordan Valley and Dead Sea area holds nearly one-third of the occupied West Bank’s land and is home to roughly 60,000 Palestinians.

In Area C, the more than 60 percent of the West Bank under full Israeli security and civilian control, Palestinian construction and land management is prohibited unless through consent or authorization by the Israeli Civil Administration.

Nearly all Palestinian applications for building permits in Area C are denied by the Israeli authorities, forcing communities to build illegally.

Meanwhile, the estimated 550,000 Jewish Israeli settlers in the occupied Palestinian territory are more easily given building permits and allowed to expand their homes and properties, despite living in settlements that violate international law.

Meanwhile, in Yaabad in the Jenin district in the northern West Bank, Israeli forces seized a mobile home resided by a Palestinian woman identified as Hishmeh Hamdouneh, according to Yaabad’s Mayor, Samer Abu Bakr.

No reason was given for why the home was seized.