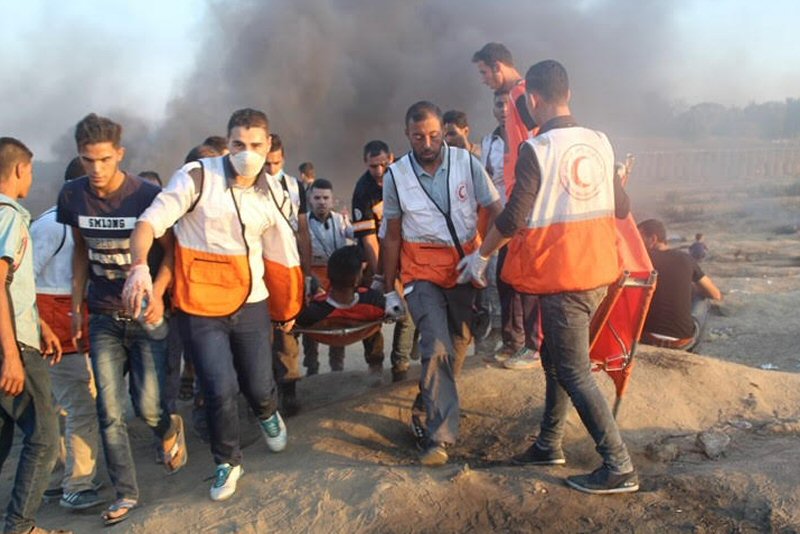 Israeli forces continued with systematic crimes, in the occupied Palestinian territory (oPt), for the week of 11 – 17 October, 2018.

In the Gaza Strip, , the Israeli forces killed 8 Palestinian civilians, including a child, during their participation in the Return and Breaking the Siege March.  On 12 Oxtober, they killed 7 civilians, including ‘Afifi Mahmoud al-‘Afifi (18) and Mohammed ‘Issam ‘Abbas (20) in eastern al-Zaytoun neighborhood, east of Gaza City; Ahmed Ibrahim al-Taweil (23), Mohammed ‘Abdel Hafiz Isma’il (29), Ahmed Ahmed Abu Na’im (17) and ‘Abdullah Burham al-Daghmah (25) in eastern al-Bureij in the central Gaza Strip, and Tamer Eyad Abu ‘Ermanah (21) in al-Shokah village, east of Rafah City. Four of them were hit with bullets to the chest, 2 to the abdomen and 1 in the head.

On 16 October 2018, the medical sources at the Indonesian Hospital in Jabalia declared the death of Saddam Shlash (27) after succumbing to wounds he sustained during his participation in the Sea March in the northern Gaza Strip the day before.  Shlash was wounded with a bullet to the upper right thigh that cut the main artery.

As part of the use of lethal force against the peaceful protestors along the border fence during the reporting period, Israeli forces wounded 310 civilians, including 62 children, 9 women, 7 journalists and 2 paramedics.  Eleven of them sustained serious wounds.

As part of targeting Palestinian fishermen in the Gaza Sea, the Israeli forces continued to escalate their attacks against the Palestinian fishermen, pointing out to the ongoing Israeli policy of targeting their livelihoods.  On 17 October 2018, the Israeli authorities decided to reduce the area allowed for fishing to 3 nautical miles along the Gaza Strip shores as part of the Israeli policy to restrict fishermen and target their livelihoods.  During the reporting period, the Israeli forces opened fire 5 times at the fishermen; 3 incidents in the north-western Beit Lahia and 2 off al-Sudaniyah shore in western Jabalia in the northern Gaza Strip.  AS a result of those attacks, 2 fishermen who are also brothers were arrested after one of them sustained wounds while their boats sustained damage.

On 17 October 2018, Israeli warplanes carried out many airstrikes in the Gaza Strip targeting military training sites for the Palestinian Armed Groups, a site belonging to the National Security Services and vacant lands.  During the airstrikes, 17 air-to-surface missiles were launched resulting ion the injury of 3 Palestinian National Security Officers, including one sustained serious wounds.  .

In the West Bank, as part of excessive use of force, on 15 October 2018, the Israeli forces killed Elias Yasin (22) from Bedia village, northwest of Salfit when he was crossing the traffic light on ‘Aber al-Samerah Street, seemingly the traffic light was red and he rapidly  crossed the street.  AS a result, an Israeli soldier opened fire at him and killed him immediately.  The Israeli forces claimed that Yasin attempted to stab soldiers so they opened fire at him without any of the soldiers being wounded.  The Israeli soldiers could have used, in case of suspicions about Yasin’s intent to stab, less lethal force and arrested him.

During the reporting period, the Israeli forces wounded 10 Palestinian civilians, including a journalist.

During the reporting period, Israeli forces conducted at least 104 military incursions into Palestinian communities in the West Bank and 6 similar ones into Jerusalem and its suburbs. During those incursions, Israeli forces arrested at least 80 Palestinians, including 7 children and 3 women, in the West Bank.  Meanwhile, 10 other civilians, including 2 children and a girl, were arrested in Jerusalem and its suburbs.

As part of the Israeli house demolitions and notices, on 17 October 2018, the Israeli municipality demolished a house belonging to Khalil Za’atrah in al-Mukaber Mount neighbourhood, south of occupied East Jerusalem’s Old City under the pretext of non-licensing.   The house was established 4 months ago and the municipality issued then a decision to demolish it, but the family resorted to the court and could delay the demolition and tried to obtain a license.  However, they were surprised with the municipality raiding he house and implementing the demolition decision without any prior warning.  The house sheltered 8 family members, including 5 children, and was built on an area on 100square meters and of sheets.

As part of demolition of houses and other civil objects, on 11 October 2018, the Israeli forces demolished 3 residential barracks built of tin plates, a residential tent, barrack, 2 livestock barns, a kitchen and a water tank in Kherbet al-Hadidiyah area in the northern Valleys, east of Tubas belonging to ‘Omer Bsharat.

On the same day, the Israeli forces levelled 5 dunums and uprooted 100 olive seedlings planted there in al-Khodor village, south of Bethlehem, belonging to Ibrahim Hamdan.  The land targeted is located between the settlements of “Prophet Daniel” and “Eli ‘Azar”, south of the city.

On 17 October 2018, the Israeli forces demolished a house and water collection well in Um al-Shaqhan area near Kherbet Khelet al-Mayeh, east of Yata in southern Hebron.  The house belonging to Mahmoud Abu Taha and is built on area of 170 square meters while the well capacity was 100 cubic meters.  The house has been built for years and was fully constructed finally so the family of 24 members, including children, were moving their furniture to the house in order to live there.

On the same day, the Israeli forces demolished a barrack built of tin plates on an area of 300 square meters and used for livestock breeding in Kherbet Ghwein to the west of al-Samou’a village, south of Hebron.  It should be noted that the barrack belonged to Shafiq al-Hawamdah.

As part of the Israeli settlers’ attacks against the Palestinians civilians and their property, on 12 October 2018, ‘Ashah al-Rabi (47) was killed from Bedia villahe, northwest of Salfit, when the car her husband was driving was thrown with stones by a group of settlers at “rihalim” settlement between the al-Sawiyah village and intersection of Za’tarah checkpoint, south of Nablus.

In addition to the crime mentioned above, PCHR’s fieldworkers in the West Bank documented 8 attacks by settlers against the Palestinian civilians and their property.  The attacks resulted in the injury of 3 civilians with bruises and wounds after being beaten.  Moreover, 540 olive trees and grape vines were damaged.

Female Civilian Killed by Israeli Settlers, who threw Stones at her Car at Za’tarah Checkpoint, south of Nablus:

According to PCHR’s investigations, at approximately 23:00 on the same day, a group of settlers, who were at the intersection of “Rahalim” settlement between al-Sawiyah village, and Za’tarah checkpoint, south of Nablus, threw stones at a Palestinian car driven by Ya’qoub Mahmoud al-Rabi (52) and his wife Aisha Mohammed Talal al-Rabi (47) along with their daughter Rama (9), from Bedia village, northwest of Salfit, as they were coming from Hebron. A big stone hit the right side of the front glass, broke the window and fall on Aisha’s head. As a result, Aisha suffered a severe bleeding from right side of the  head front and above the eyebrow. Aisha’s husband drove to Ebn Sina Polyclinic in Howarah village, but she was dead. Aisha was then transferred as a dead body to Rafidiya Hospital in Nablus. After medical examination, it was clear that the brain exited from the head front, causing Aisha’s death. Her husband and daughter were very shocked. Ya’qoub said to PCHR’s fieldworker that:

“I went to bring my wife, who was visiting our daughter in Hebron and were accompanied with our daughter Rama (9). After we crossed al-Sawiyah intersection near “Rahalim” settlement, adjacent to Za’tarah checkpoint, We suddenly heard a scream in Hebrew language and then stones started hitting our car. A big stone broke the front glass and hit the head of my wife Aisha, but I did not know that she was wounded because she did not scream at all. I looked at her and found that she was bleeding. I called her name twice, but it seemed that she died immediately. Her head was covered with blood. My daughter Rama started screaming as I was calling her mother. I quickly crossed Za’tarah checkpoint and arrived at Ebn Sina Polyclinic in Howarah village. Doctors there confirmed that Aisha died because of the stone that hit her head.”

Israeli forces continued its excessive use of lethal force against peaceful demonstration organized by Palestinian civilians in in the West Bank and Gaza Strip, and it was named as “The Great March of Return and Breaking Siege.” The demonstration was in protest against the U.S. President Donald Trump’s declaration to move the U.S. Embassy to it. According to PCHR fieldworkers’ observations, the border area witnessed large participation by Palestinian civilians as the Israeli forces continued to use upon highest military and political echelons excessive force against the peaceful demonstrators, though the demonstration were fully peaceful. The demonstration was as follows during the reporting period:

The wounded journalists were identified as:

The wounded paramedic identified as Habibah Mahmoud Abdul ‘Aziz al-Sekafi (22), from Beit Lahia, was hit with a tear gas canister to the feet.

Nada Salman, ‘Abdullah Salman’s wife, said that: “We entered our land and we could barely recognized it. We found a large area was leveled, in addition to 22 olive trees. The land was turned to an empty yard for celebrations. We also found empty beer bottles put in boxes. All the crops were stolen.”