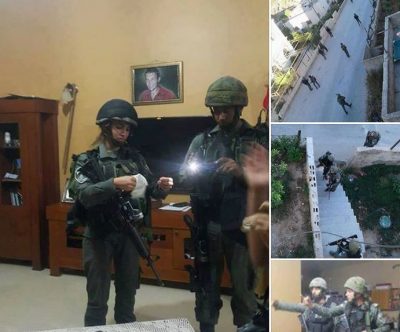 Israeli soldiers invaded, on Tuesday at dawn, the village of Nabi Saleh, northwest of the central West Bank city of Ramallah, violently searched and ransacked homes, and fired many gas bombs at homes, during clashes that took place following the invasion, causing many children to suffer the severe effects of teargas inhalation.

The three were not at home during the invasions, while the soldiers resorted to excessive violence and deliberate property damage, demanding the three Palestinians “to surrender.”

The invasion led to clashes between dozens of youngsters, and the soldiers, who fired many gas bombs and rubber-coated steel bullets, causing several children to suffer the severe effects of teargas inhalation.

The wounded children received treatment for the severe effects of teargas inhalation, without the need to hospitalize any of them.

In related news, the soldiers invaded Beit Ummar town, north of Hebron, in the southern part of the occupied West Bank, and abducted four Palestinians, among them three siblings, including a child, and caused dozens of residents to suffer the effects of teargas inhalation.