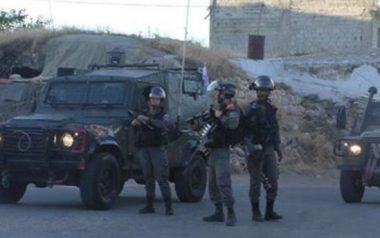 Israeli soldiers invaded, on Tuesday at dawn, Beit Ummar town, north of Hebron, in the southern part of the occupied West Bank, and abducted four Palestinians, among them three siblings, including a child, and caused dozens of residents to suffer the effects of teargas inhalation.

Mohammad Awad, a media activist in Beit Ummar, said the soldiers used a robot in breaking into the home of Issa Sleibi, allegedly looking for explosives, before destroying various sections of tiles in his home’s floors, and searched the property for more than ninety minutes.

He added that the police then abducted Issa’s sons, Mohammad, 32, and Ala’, 25, both former political prisoners, in addition to Khaled, only fifteen years of age.

The soldiers also summoned their mother, and Ala’s wife, for interrogation at the Etzion military base and security center, north of Hebron, this coming Wednesday.

The invasion and abductions led to clashes between dozens of youngsters and the soldiers, who fired many gas bombs, causing dozens of residents to suffer the severe effects of teargas inhalation.

All wounded Palestinians received the needed treatment by local medics without the need for further medical treatment.