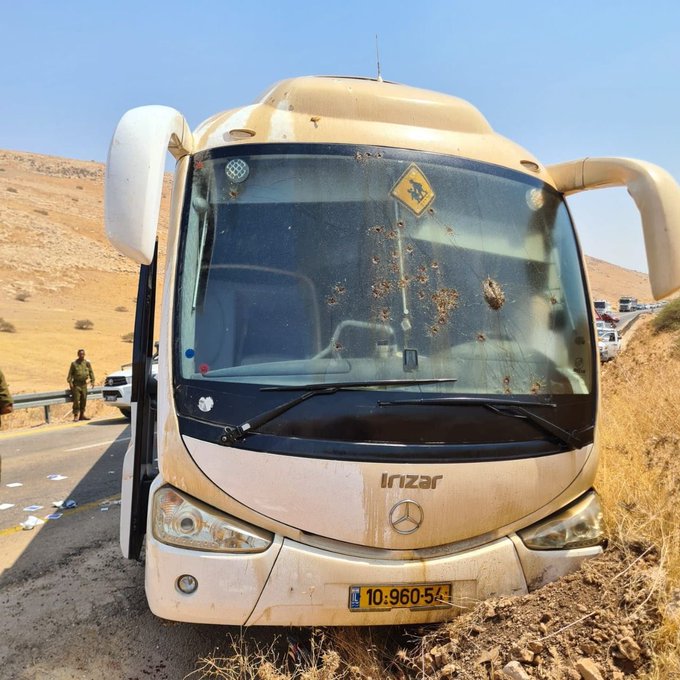 In the Jordan Valley, in the eastern part of the West Bank near Jericho on Sunday, unknown assailants opened fire at an Israeli bus transporting soldiers to a military base, injuring five soldiers and the civilian driver of the bus.

The injuries of two of the men were described as moderate (including the driver, who sustained a gunshot wound to the face), and the other four had injuries that were described by medical personnel as ‘mild’.

The two men with moderate injuries were transported by helicopter to the Ramban Medical Center in Haifa.

The Hamas resistance movement issued a statement that they were in support of this attack, which was in response to the “Zionist occupier and their settlers’ crimes and aggression against Al-Aqsa Mosque and prisoners”. This is a reference to the ongoing and frequent invasions by Israeli soldiers and settlers into the Al-Aqsa Mosque, the third-holiest site in Islam, and to the detention of thousands of Palestinians in so-called ‘administrative detention’ in which Palestinians are imprisoned by Israeli authorities without any charges or access to legal representation.

According to the Israeli sources, the Palestinian men who shot the bus then tried to throw bottles stuffed with rags and ‘kerosene to try to light the bud on fire, but one of the bottles ignited their truck on fire. They then allegedly drove another kilometer and pulled over when their vehicle caught fire. continuing on foot.

Two men were arrested by Israeli forces under suspicion of involvement in the attack. They have been identified as Mohammed and Walid Turkman from the Jenin area in the northern West Bank. They were found to be seriously injured from the burning vehicle, and taken to the burn center at Sheba Medical Center in Tel Hashomer, where they were interrogated by Israeli soldiers.

The attack took place on Route 578, as the soldiers were traveling between B’qaot to B’qaot junction near Hamra illegal Israeli colonial settlement.

Israeli sources reported that a soldier in the Lions of the Jordan Valley Battalion, told them that “Within a few minutes, we arrived at the location and began searching. Through my binoculars, we identified two suspects from a distance and we operated to stop the suspects and apprehend them for further investigation”.
Surrounding Palestinian villages remain on lockdown as Israeli troops punish the entire Palestinian civilian population for the actions of the two men who shot at the bus.

Israeli Prime Minister Yair Lapid issued a statement that “Security forces acted quickly and decisively to treat the wounded and apprehend the terrorists. We will continue and put our hands on anyone who tries to harm the citizens and soldiers of the State of Israel.”