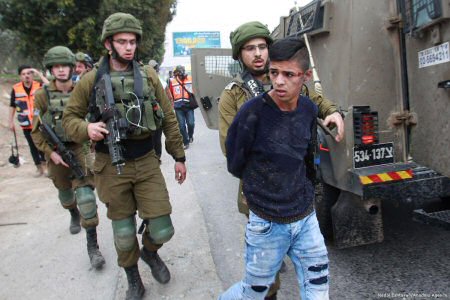 The Israeli forces, on Monday, and Tuesday morning, detained a number of Palestinian civilians in the occupied West Bank, the Palestinian Information Center reported.

In the southern West Bank city of Hebron, Israeli troops detained a 14-year-old child, identified as Ahmed al-Badawi, from his home in al-Arroub refugee camp in northern Hebron.

Israeli police officers, on Tuesday morning, took a Palestinian youth into custody, after severely assaulting him near Bab al-Sahira area in the Old City of occupied Jerusalem.

The Israeli police alleged that the young man had intended to carry out a stabbing attack.

Eyewitnesses said that troops opened fire in the air, alleging that the youths intended to throw fire bombs near the settlement.