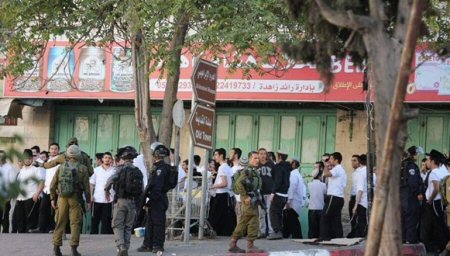 According to local sources, large numbers of Israeli forces were deployed across Hebron City to seal off various streets, went up the rooftops of several buildings in the areas, in which restrictions were imposed and banned residents from movement.

Israeli forces also forced shops to close in the Bab al-Zawiya area, Beersheba Street and al-Shuhada Street, to ease access for Israeli settlers to the burial site of Abraham and Sarah, in Hebron City.

Meanwhile, dozens of Israeli settlers raided Palestinian houses in the Tel Rumeida neighborhood, also in Hebron City, and showered its residents with rocks.

Local Ma’an News Agency sources confirmed that, due to the raid, material damages were caused to the home of resident, Abed al-Aziz Abu Haykal.

Some 800 notoriously aggressive Israeli settlers now live under the protection of the Israeli military in Old City Hebron, surrounded by more than 30,000 Palestinians.

Palestinian residents of the Old City face a large Israeli military presence on a daily basis, with at least 32 permanent and partial checkpoints set up at the entrances of many streets.

Additionally, Palestinians are not allowed to drive on al-Shuhada street, have had their homes and shops on the street welded shut, and, in some areas of the Old City, are not permitted to walk on certain roads.

According to a report by Israeli rights group B’Tselem, Settler violence and vandalism takes place with full backing by Israeli authorities. Sometimes, soldiers take part in the assault; at other times, they stand idly by. Police make no substantial effort to investigate the incidents, nor takes measures to prevent them or stop them in real time.