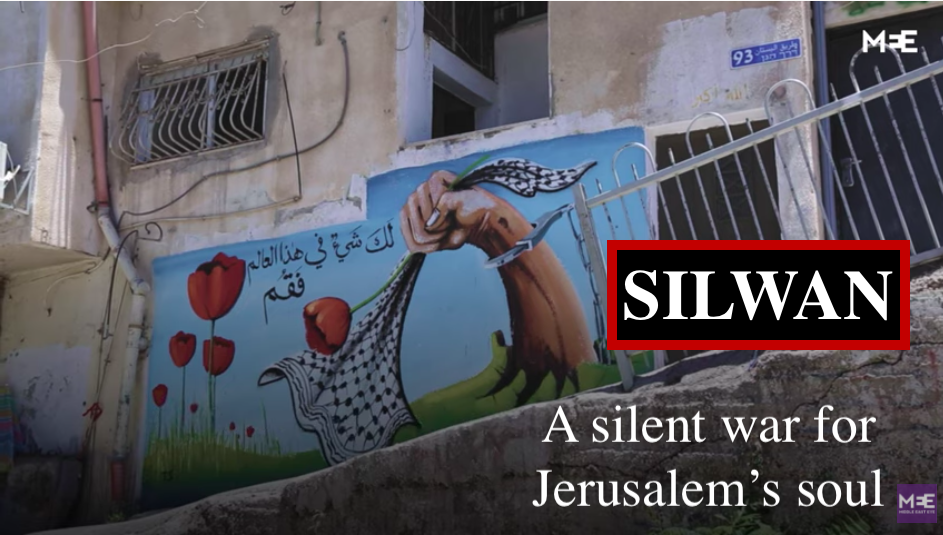 Since the Israeli occupation of East Jerusalem in 1967, Silwan has been the target of ongoing illegal Israeli settlement activity. Qutaiba Odeh is one of thousands of Palestinians in the ancient town fighting home demolitions and evictions to remain in their homes.

Qutaiba Odeh: “We live in a silent war. It’s a war you don’t hear or see, but as Palestinians in Jerusalem, we live it around the clock. There is not a house in Silwan today that does not have a story or a hardship. Either they have someone in prison, someone wounded or martyred, a child or a young man detained, a house threatened with demolition by the [Israeli] municipality or facing eviction by [Israeli] settlers.

My name is Qutaiba Odeh, a resident of Silwan town. My dream is that our generation does not live the same Nakba our forefathers lived. I am a from a Palestinian family in Jerusalem living in Silwan. We are a family of 21 members living in three neighborhoods. In Silwan, we have three houses, two of them threatened with demolition and the other one threatened with eviction.

If we speak about Jerusalem, we speak about Silwan. Yabous (Jebusites), the first Canaanite tribe, started in Silwan. The origin of human settlement in Jerusalem started in Silwan. Silwan is the southern safeguard of the Old City and al-Aqsa Mosque. Palestinians here live in approximately 12 neighborhoods, 6 of these neighborhoods are threatened with forced displacement and ethnic cleansing. We are here today in al-Bustan neighborhood. The [Israeli] occupation municipality decided in 2004 to demolish this neighborhood and turn it into a biblical park.

They want to settle in Arab towns and neighborhoods in Jerusalem among the Palestinian population in East Jerusalem. they want to abolish the idea of Jerusalem being the capital of Palestine through these settlement projects here and there, so that in the future they’ll be the majority and we the minority. Settler organizations like Ateret Cohanim, Elad and the Jewish National Fund are very active here and have a lot of influence. They are the other face of the right-wing occupation government.”

Since the Israeli occupation of East Jerusalem in 1967, ongoing illegal settlement activity in Silwan has sought to forcibly displace Palestinians to make way for Israeli settlers and national “biblical” parks.

For decades, Palestinians in the ancient town have been fighting against home demolitions and court-ordered evictions.

Odeh: “When I was 11-years-old, we had one house that was threatened with demolition in al-Bustan neighborhood. Back then we had a slogan which I remember clearly; ‘Today it is my home, tomorrow will be yours.’ Today, 16 years later, I, Qutaiba Odeh, have three houses instead of one threatened with forced displacement and eviction.”

Silwan resident: ” The goal is to demolish, to displace me. But what they are doing will not displace me. In a tent, under the rain and the sun, I will stay on this land. I will never leave it.”

Odeh: “It is a slow death that we, our children, our women and our youth live in. Maybe today we do not see the accumulating impact of this war on our bodies, but it is a psychological war. For us, it is a big war we live in constantly.
What tools do we have as Palestinians to show that we still live here? To show that we are not minorities and some foreign occurrence here. We are the owners of this land. Words are all we have to defend ourselves.

Just by saying ‘we will not leave’. We are painting these murals today on the walls of our homes that are threatened with eviction, to reaffirm their identity, and that we are the true Palestinian owners of these homes. These murals are the paintings of our lives, they are the bright eyes with which we see the world. These murals are the paintings by which we convey our voice to the universe saying that there are still Palestinians in Jerusalem, who are threatened in the twenty-first century with eviction and expulsion from their homes.”

Some 84 families in Silwan face eviction lawsuits, while 100 properties face demolition orders putting more than 2,200 Palestinians at risk of mass expulsion. As of 2018. at least 228,000 Israeli settlers live in occupied East Jerusalem, in violation of International Law.

Odeh: “Today I feel pain for every house in Silwan or Jerusalem being demolished or seized. This is not about Qutaiba. I am a reflection of these people, one individual. The point here is the forced displacement and ethnic cleansing of thousands of people, hundreds of homes. We are not talking about an individual story here. We are talking very much about a collective story. The names differ between Sheikh Jarrah and Silwan but in the end it is the same goal, the same issue, the same suffering, the same occupation and the same settler.

Having a home and living in Jerusalem is not an easy matter. It’s a big deal. We understand the weight of this. We know where we are. And we know the price we have to pay. From our lives, from our health. We know what it is going towards: our existence on this land. The subject of our homes is not easy. Honestly. I don’t think that we are today in a place where we can say our homes are just structures made from stones. Our homes are not just stones. For us, our homes are our dreams. They’re our memories, our past, present and future. They are my mother and father who lived in this place. They are our grandchildren, my nieces and nephews, who are growing up here. They are our stories. Our pain. Our happiness. Our graduation celebrations. Our warm hug. Our place of gathering. Our safety and security. Our homes are not stones and they will never be stones. For us, our homes are our life.”