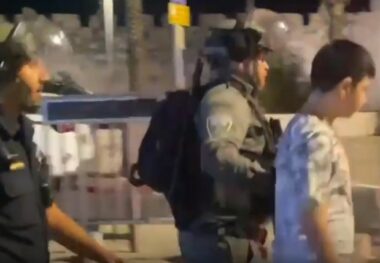 Israeli soldiers abducted, on Monday at dawn, a Palestinian and assaulted his brothers, near Nablus, in northern West Bank, and one near Hebron, in the southern part, in addition to three teenage boys in the occupied capital, Jerusalem.

He added that the soldiers also attacked his two other sons, causing injuries, before forcing Ehab in one of their jeeps, and drove to an unknown destination.

The soldiers also invaded the al-Koam village, southwest of the southern West Bank city of Hebron, and abducted Nidal Yousef al-‘Awawda, after storming his home and ransacking it.

In addition, the soldiers invaded Jaba’ town, south of the northern West Bank city of Jenin, abducted two Palestinians, and injured two others.

On Sunday, the soldiers detained a young man, identified as Sufian Salayma, in Bab al-‘Amoud, in Jerusalem, and took him to a room where they repeatedly attacked him, before releasing him. (Video Wadi Hilweh Information Center In Silwan – Silwanic)