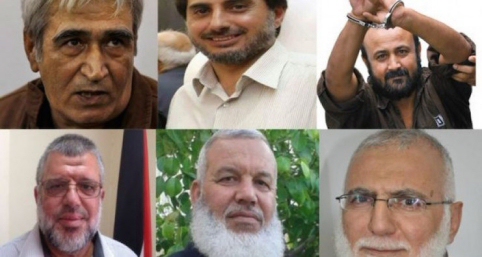 Two are serving sentences issued to them by Israeli military courts – Palestinian national leaders Ahmad Sa’adat and Marwan Barghouti, both of whom boycotted the military courts that sentenced them – and four held in administrative detention without charge or trial.

Ahmad Sa’adat, 63, the General Secretary of the Popular Front for the Liberation of Palestine, has been imprisoned in Israeli prison since 2006, when he was abducted in a military raid on the Palestinian Authority’s Jericho prison, where he had been imprisoned since 2002 under US and British guard under an agreement between the US, UK, PA and Israel. Sa’adat was sentenced to 30 years imprisonment for incitement and membership and leadership in a prohibited organization, his party, the PFLP.

Marwan Barghouti, 58, Fateh representative in the Palestinian Legislative Council, was arrested in 2002 and is serving five life sentences, accused of leading Fateh’s armed resistance wing in the West Bank.