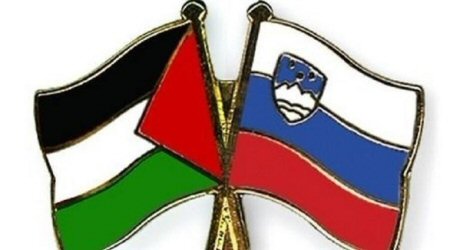 The Slovenian government decided to move ahead with plans from the past week, to recognize the Palestinian state, media sources reported. The Slovenian parliament is due to file, on Wednesday, a draft resolution recognizing the state of Palestine.

The Slovenian government hopes that MPs will vote in favor of recognition and become the second country to do so as an EU member state, Slovenian foreign minister Karl Erjavec said on Monday, according to Al Ray.

“Everybody [other EU member states] backs such a Slovenian step that will happen if parliament green lights the proposal for recognizing the Palestinian state,” Mr Erjavec told private channel POP TV.

The minister was speaking from Brussels, where PA president Mahmoud Abbas met European foreign ministers, to whom he urged the recognition.

Of the 28 EU member states, Sweden was first to officially recognize the Palestinian state in 2014. Eight other countries took the step before entering the EU: the Czech Republic, Slovakia, Hungary, Bulgaria, Romania, Malta and Cyprus.

Slovenia’s parliamentary foreign affairs committee will meet in Ljubljana on January 31, to approve the proposal before sending it to parliament, which could vote on the issue in a session in March or April, according to Slovenian RTV public television.

“By recognizing it, [Slovenia] would strengthen Palestine’s negotiation in the Middle East peace process. We have an independent foreign policy, we do not need any other state to cover our back,” Mr Erjavec said.

Meanwhile, PA Minister of Foreign Affairs,Riyad Maliki has reiterated the administration’s ambition to be granted full UN member status ahead of the convening of the United Nations Security Council, on 20 February.

Maliki highlighted the need for international protection for Palestinians suffering under Israeli occupation.

Maliki said they will call on the Security Council to renew obligations to past resolutions concerning Israeli settlement building, namely Resolution 2334.

Resolution 2334 condemns ‘all measures aimed at altering the demographic composition, character and status of the Palestinian Territory occupied since 1967’.

The upcoming meetings of the Security Council will be chaired by Kuwait.  The monthly closed meeting of the council will be held on the 20th, with successive meetings over the following days to further examine security issues in the Middle East, as well as the implementation of past resolutions.

Prior to the Security Council convening, Prime Minister Rami Hamdallah will travel to Brussels to meet with the High Representative of the European Union for Foreign Affairs and will later attend the donor’s conference.

Maliki confirmed that Slovenia’s recognition of Palestine will be among the topics discussed and that it will be submitted to Parliament on Wednesday. If approved, it would be enforced in the coming months.