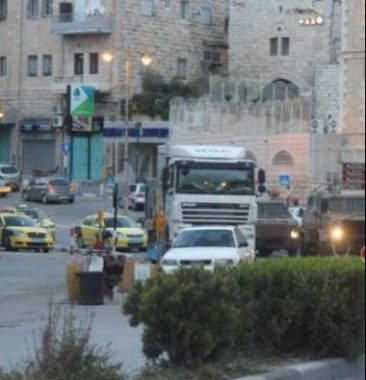 Israeli soldiers abducted, on Monday afternoon, two Palestinians, including a child, in the al-Khader town, south of Bethlehem, and in Shu’fat neighborhood, in occupied East Jerusalem.

Media sources in Bethlehem said the soldiers invaded the al-Khader town, south of the city, and abducted Hasan Khaled Salah, 18.

They added that the soldiers also fired live rounds at many young men, who hurled stones at the army jeeps, after invading their town.

The soldiers also invaded and searched several shops and viewed surveillance videos overlooking the streets near them.

In occupied Jerusalem, the soldiers abducted a child, only 15 tears of age, after alleging that he hurled stones at the Light Rail, in Shu’fat neighborhood, in the center of Jerusalem.

In related news, an Israeli colonialist settler rammed a Palestinian child with his car, near the Ibrahimi Mosque, in the southern West Bank city of Hebron.

Medical sources said the child, identified as Ala Abu Mayyala, 5, suffered moderate wounds, and was rushed to a hospital in Hebron.