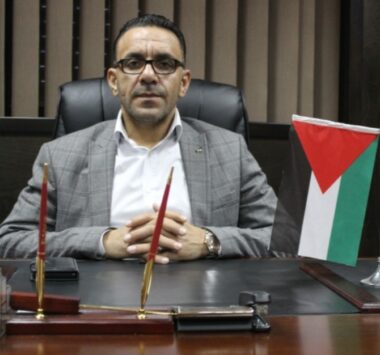 Israeli soldiers invaded, Thursday, the home of Jerusalem governor, Adnan Gheith, in the al-Wista neighborhood in Silwan town, south of the Al-Aqsa Mosque in the occupied capital and summoned him for interrogation at the al-Maskobiyya interrogation facility.

Media sources said several army jeeps invaded the town, before the soldiers surrounded Gheith’s homes, and broke into it.

They added that the soldiers, accompanied by intelligence officers, violently searched the property, and assaulted Gheith in front of his family, before abducting him.

It is worth mentioning that, in August of this year, Israel issues an order that prevented Gheith from entering other parts of the West Bank for three years, or even participating in any meetings or activities that aim at helping the Jerusalemite Palestinians.

The order also restricts Gheith’s movement in east Jerusalem and includes a map of where he can go inside Silwan, in addition to barring him from having any contact with 51 Palestinian officials.

The first order he received barring him from entering other parts of the West Bank was in the year 2018, immediately after he was appointed the governor by the Palestinian Authority and has since then been abducted 28 times.

Earlier Thursday, the soldiers abducted twenty-one Palestinians from their homes in several parts of the West Bank, including eleven in the occupied capital, Jerusalem.