Soldiers Abduct A Child Near Nablus 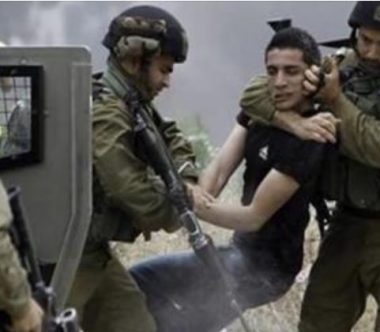 Israeli soldiers abducted, Sunday, a Palestinian child, after beating him up, in Salem village, east of the northern West Bank city of Nablus.

The Palestinian Prisoners’ Society (PPS) has reported that the soldiers invaded the village, and attacked Palestinian protesters, marching in their village, before abducting the child.

Earlier Sunday, the army abducted two Palestinians in Hebron and Jerusalem, after the soldiers invaded and searched homes, and interrogated several Palestinians.

The soldiers also injured a young Palestinian man, and caused many to suffer the effects of teargas inhalation, near the western entrance of Birzeit University, north of Ramallah, in central West Bank.