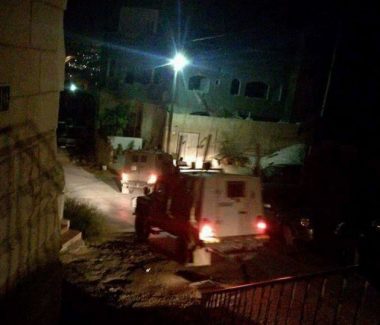 Israeli soldiers invaded, on Monday at dawn, Jenin city, in northern West Bank, abducted a former political prisoner, in addition to breaking into the home of a former government minister, before interrogating him and his con.

The Jenin office of the Palestinian Prisoners’ Society (PPS) said the soldiers abducted former political prisoner, Abdul-Jabbar Mohammad Jarrar, 52, after detonating the front door of his home and ransacking the property.

The soldiers cuffed and blindfolded the Palestinian man, before moving him to an unknown destination.

In related news, the soldiers detonated the main door of the home of former government minister, former political prisoner Wasfi Kabaha, in the al-Basateen neighborhood in Jenin city, and interrogated him along with his son, Osama.