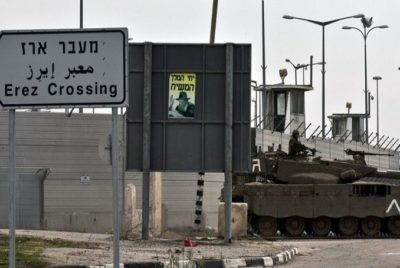 Israeli soldiers abducted, Sunday, the executive director of Mirsal Post Company in the Gaza Strip, as he was crossing the Erez (Beit Hanoun) Crossing, in the northern part of the coastal region.

The Palestinian has been identified as Sa’id Shorafa, and was taken by the soldiers to an unknown destination, despite carrying a permit to cross into Israel.

It is worth mentioning that Mirsal is a company of the al-Shurafa Group that has been operating in the field of global mail distribution for the past 25 years.

The abduction of Shorafa came shortly after the soldiers abducted another Palestinian, identified as Mansour Ibrahim Mansour, at the Erez Terminal while he was heading to Jerusalem.

It is worth mentioning that the soldiers have abducted 10 Palestinians this year on border crossings, nine of them were taken prisoner at Erez Terminal, and one who was abducted at the al-Karama Border Crossing between the occupied West Bank and Jordan, after he finished medical treatment in Amman.