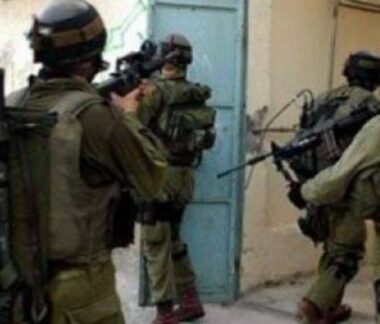 On Thursday dawn, Israeli soldiers abducted one Palestinian while a paramilitary colonizer attacked farmers in Tulkarem, in the northern part of the occupied West Bank.

In addition, a paramilitary illegal Israeli colonizer attacked Palestinian farmers on their lands in Shoufa village, southeast of Tulkarem.

The assailant, a security guard at the illegal Avnie Hefetz colony, attacked the farmers while watering their trees and tried to force them to leave.

The colony was built on lands stolen from the Palestinians from Shoufa, Kafr al-Lubbad, Kafa, and al-Hafassi.

Also, the soldiers abducted two young Palestinian men in the Ramallah governorate in the central part of the occupied West Bank.

Earlier Thursday, the soldiers killed a young man, Yazan Naim Affana, 24, in the Sateh Marhaba neighborhood in the al-Biereh city near Ramallah, and Samer Mahmoud Suleiman Khaled, 25, from the al-Ein refugee camp in Nablus, after shooting him with a live round in the neck while sitting in his car in Balata refugee camp, east of Nablus, in the northern part of the occupied West Bank.