Soldiers Abduct A Palestinian During His Engagement Party 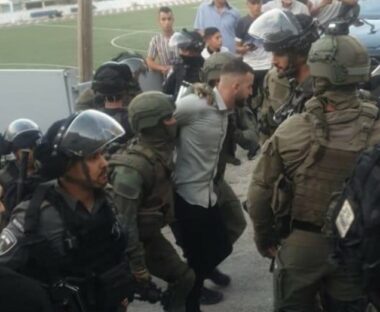 Israeli soldiers abducted, on Thursday evening, a young Palestinian man, who is also a former political prisoner, during his engagement party in the al-Isawiya town, in occupied Jerusalem.

Local sources have reported that the soldiers abducted Anwar Sami Obeid during his engagement party in the house of his fiancé.

They added that the soldiers transferred Obeid to an interrogation facility.

Obeid is a former political prisoner who was frequently abducted, interrogated, and imprisoned, including when he was a child and was also previously exiled out of Jerusalem for several months.

It is worth mentioning that the soldiers also abducted Ahmad Saleh Kash’am, 20, in addition to Yousef Resheq from Silwan town, in Jerusalem. Yousef was taken prisoner after the soldiers summoned him for interrogation.

The soldiers invaded and searched many homes, including the home of a former political prisoner, identified as Shoeib Abu Sneina, who was forcibly exiled from Jerusalem to Gaza.

Earlier Thursday, the soldiers invaded and searched many homes in Silwan, and abducted several Palestinians.

On Thursday at dawn, the soldiers abducted thirteen Palestinians, including a father and his two sons, and injured at least two, when the army invaded several communities in the West Bank, including Jerusalem.