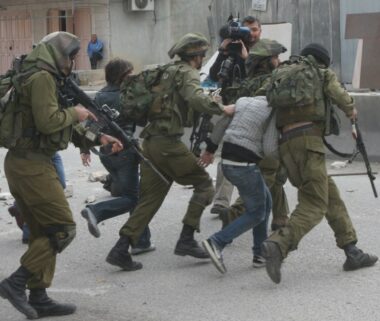 Israeli soldiers abducted, on Thursday at dawn, thirteen Palestinians, including a father and his two sons, and injured at least two, when the army invaded several communities in the occupied West Bank, including the occupied capital, Jerusalem, and stormed many homes before ransacking them.

Media sources in Jenin, in the northern part of the West Bank, said the soldiers invaded the al-Yamoun town, west of the city, searched several homes, and abducted two young men, identified as Mansour Abahra and Sharir al-Bashir.

In addition, the soldiers installed roadblocks in several areas of the Hebron governorate, before stopping and searching dozens of cars, and interrogated the Palestinians while inspecting their ID cards.

In Silwan town, south of the Al-Aqsa Mosque in the occupied Palestinian capital, Jerusalem, the soldiers stormed and ransacked homes before abducting six Palestinians.

Four of the abducted young men have been identified as Mohammad Sarhan, his brother Sultan Sarhan, and a child, Nassim Zoheir Dmeiri, in addition to Ahmad Salah Kash’am.

The invasion and abductions came after the Palestinians in Silwan called for holding noon prayers, Friday, in the protest tent in Silwan, which was installed in condemnation of the ongoing illegal Israeli home demolition policy and the displacement of the residents to replace them with illegal Israeli colonizers.

In Tubas, in northeastern West Bank, the soldiers invaded the Wadi al-Far’a and the al-Far’a refugee camps, south of the city, shot two young men with live fire, and abducted three others.

Kamal Bani Odah, the head of the Tubas office of the Palestinian Prisoners’ Society (PPS) said the soldiers stormed and ransacked many homes, causing damage.

He added that the soldiers abducted Najeh Abdullah Kilani along with his sons Mahdi and Mojahed.

In addition, protests took place after the soldiers invaded the al-Far’a refugee camp, and the soldiers fired many live rounds, gas bombs, and concussion grenades.

Medical sources said two young men were shot with live Israeli army fire and were rushed to a hospital in Tubas.