After Demolishing Two Homes, Soldiers Injure Many Palestinians Near Hebron 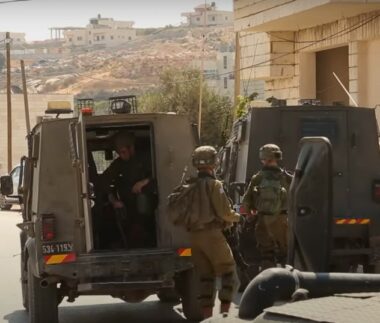 Israeli soldiers injured, Thursday, one Palestinian and caused dozens to suffer the effects of tear gas inhalation, in Sa’ir town, east of the southern West Bank city of Hebron, during protests that erupted after the army demolished two under-construction homes.

Medical sources said the soldiers shot one Palestinian with a rubber-coated steel bullet before the medics provided him with the needed medical treatment.

They added that the soldiers also fired a barrage of gas bombs and concussion grenades at the Palestinians, causing dozens to suffer the effects of tear gas inhalation, in addition to cuts and bruises.

The protests took place after dozens of soldiers invaded the town and demolished two under-construction homes.

Also on Thursday, the soldiers demolished two residential tents and one residential shed, in addition to two barns, in the Ka’abna Bedouin village, near the al-Mo’arrajat area, east of the central West Bank city of Ramallah, and confiscated agricultural tools.

In related news, the soldiers invaded Jeet village, east of the northern West Bank city of Qalqilia, and handed a Palestinian, identified as Samed Khader, an order to halt the construction of his 120 square/meter home.