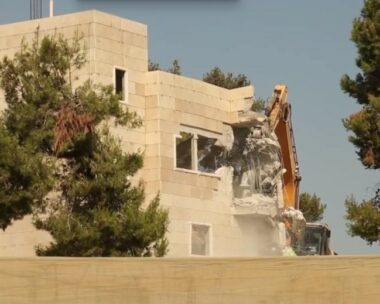 Several Israeli army jeeps and a bulldozer invaded the Wad ash-Sharq area in Sa’ir, before demolishing two three-story homes, owned by ‘Aahed Ali Jaradat and Jamal Mohammad Jaradat, and were built on their privately owned lands.

Each floor of the two three-story homes was about two hundred square/meters, and were permitted by the local council, however, the army claimed the “Civil Administration Office,” the administrative branch of the illegal Israeli occupation, did not grant permits to the buildings, because they are in Area C of the occupied West Bank.

The Palestinians protested the invasion and the destruction of the homes, before the soldiers attacked them with batons, in addition to firing gas bombs and concussion grenades.

Furthermore, the soldiers also assaulted and abducted a young man, and took him to an unknown destination.

It is worth mentioning that the Wad ash-Sharq area is subject to repeated Israeli violations, including attacks by the illegal colonialist settlers, especially since it is close to bypass road #60, linking the illegal Kiryat Arba’ Colony with colonialist blocks in the northern and southern parts of Hebron.