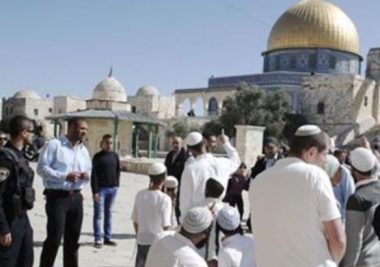 Israeli soldiers abducted, on Monday at noon, a young Palestinian man who was praying in the courtyards of the Al-Aqsa Mosque, in occupied East Jerusalem, and took them to an interrogation facility.

Eyewitnesses said the soldiers stopped the Palestinian in front of the mosque and abducted him before moving him to a police station in the Old City.

They added that dozens of Israeli colonizers, accompanied by many soldiers and officers, invaded the courtyards of the holy site, and conducted provocative tours.

In related news, the soldiers attacked many schoolchildren in Burin village, south of the northern West Bank city of Nablus, and fired gas bombs at them.

On Monday at dawn, the soldiers abducted 21 Palestinians in the West Bank, and eleven fishermen in the besieged Gaza Strip.