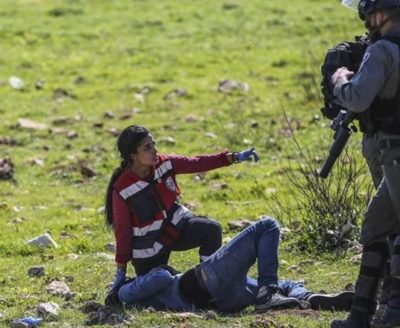 Israeli soldiers injured, Monday, seventeen Palestinians, including eight who were shot with live rounds, after the army attacked dozens of students of Birzeit University, protesting the Israeli abduction and imprisonment of the head of the Students’ Senate, who was taken prisoner last Wednesday, when the soldiers invaded the university campus.

The students, and many other Palestinians, marched towards the northern entrance of al-Biereh city, near the military roadblock which leads to an army base and the military court.

Dozens of soldiers assaulted the students with their guns and batons, especially on their heads, wounding two , and attempted to abduct them, but Palestinian medics managed to rescue them.

The soldiers also physically attacked many medics, and spayed them with pepper-spray, wounding one of them. One of the wounded Palestinians suffered life-threatening injuries.

Furthermore, the soldiers attacked many reporters with their guns and batons, used pepper-spray against them, and removed many journalists from the area.

Undercover Israeli soldiers also tried to ambush many Palestinians in the al-Baloa’ area, in al-Biereh, but were unable to do so after their attempts were exposed by the locals.