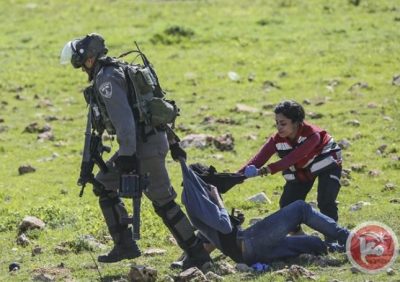 On Monday, four Palestinian medics, and despite being repeatedly assaulted and dragged by the Israeli soldiers, managed to rescue wounded Palestinians after the soldiers resorted to the excessive use of force against protesters on the main road leading to the military court, north of al-Biereh city, in central West Bank.

The four medics were filmed by various media agencies, performing their humanitarian duty, despite the military violations against them.

They have been identified as Nisreen Amira, Ayman Qirret, Atiya Dweik and Mohammad Omar; they managed to provide the urgently needed treatment to wounded Palestinians, and even managed to take them away to hospitals despite the army’s attempts to abduct them.

It all started when a young man was shot after the soldiers resorted to the excessive use against the Palestinian protesters and tried to remove them from the area.

The soldiers then injured the wounded young man’s friend, while was trying to help him.

The four volunteer medics rushed to the wounded Palestinians’ aid, but the soldiers assaulted them by first firing live rounds above their heads, then used pepper-spray against them, in addition to physically attacking them, but they remained determined to perform their duty, and managed to evacuate the two wounded Palestinians.

After ongoing assaults by the soldiers, three of the medics managed to rush one of the wounded Palestinian to a nearby ambulance, while Nisreen Amira, the 19 years of age volunteer medic, stayed behind with the second wounded Palestinian, trying to protect him and provided him with the needed aid, while the soldiers continued to strike her and point their guns at her.

One of the soldiers tried to drag the wounded Palestinian from his arm, but Nisreen protected him, and refused to allow the soldiers to abduct him, and insisted on providing him with the medical aid he urgently needs.

By then, the three other medics returned to the area, and despite suffering the effects of tear gas and pepper-spray, they managed to help Nisreen and evacuated the wounded young man to a hospital. Palestinian journalists, who were also assaulted and some injured by the soldiers, documented the unfolding events, and filmed Nisreen, while struggling with the heavily armed soldiers, just to be able to perform her humanitarian and medical dirty.

After the assault, and the injuries she suffered, Nisreen smiled and placed the gas mask on her face, and said, “This is the third time I get injured by the soldiers, but I will continue to perform my duty; their attacks and violations will never deter us from this humanitarian task.”

During the Israeli army attack, the soldiers injured seventeen Palestinians, including eight who were shot with live fire, and assaulted many jou * This Report was first published In Arabic by Firas Tanneena, Maan News Agency