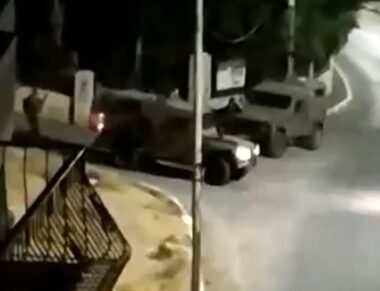 Israeli soldiers abducted, on Tuesday at dawn, a young man from his home in Beit Fajjar town, south of Bethlehem, south of occupied Jerusalem in the West Bank.

They added that the soldiers then abducted Ahmad Salah Thawabta, from his home and moved him to Etzion military base and security center, south of Bethlehem.

The soldiers also invaded and searched the home of Mohammad Ahmad Sheikh, in Marah Rabah village, south of Bethlehem, and searched it. Mohammad is the father of Mahmoud, a political prisoner held by Israel.

On Monday evening, the soldiers stopped and interrogated two young Palestinian men in Bab al-‘Amoud area in occupied Jerusalem, before abducting them.