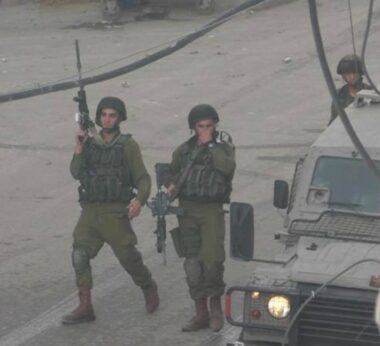 Israeli soldiers invaded, on Sunday at night, the Saff Street, in the center of Bethlehem city, in the occupied West Bank, abducted one Palestinian and injured dozens.

Media sources said the soldiers invaded and ransacked the homes on Ismael al-Battat, looking for his son, Ali, but could not find him.

They added that the soldiers abducted the son, Ali, 23, near his home and took him to Etzion detention and interrogation facility.

It is worth mentioning that the invasion into Bethlehem took place from several directions and was carried out by many army jeeps carrying dozens of soldiers.

On Sunday evening, several army jeeps invaded the at-Tira neighborhood in the central West Bank city of Ramallah and installed a roadblock on the street between the neighborhood and Ein Qiniya town, northwest of the city.

During the invasion, the soldiers fired many gas bombs at Palestinians who gathered in the area.