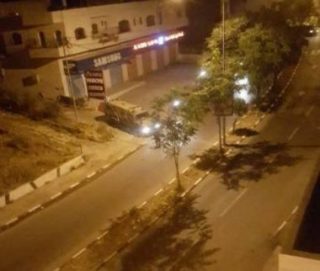 Undercover Israeli soldiers kidnapped, Saturday, a Palestinian man near Barta’a village, southwest of the northern West Bank city of Jenin, while a teenage boy was abducted by the army near Bethlehem.

Montaser Sammour, the head of the Jenin office of the Palestinian Prisoners’ Society (PPS) said the soldiers abducted Ahmad Abdul-Latif Zayyoud, in his thirties, and took him to a nearby military base.

Sammour added that the abducted young man is from Sielet al-Harithiya town, west of Jenin.

In related news, the soldiers invaded the al-Khader town, south of Bethlehem, and abducted a teenage boy, identified as Luay Zaghari.