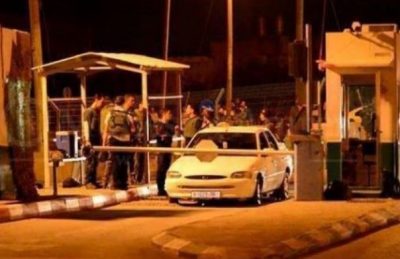 Israeli soldiers abducted, on Sunday at night, a Palestinian man near Bethlehem, south of occupied Jerusalem in West Bank, after he reportedly approached a military roadblock carrying a knife.

The army is alleging that the Palestinian man approached a military roadblock while carrying a knife and that he dropped it before the soldiers arrested him.

The army did not report any injuries among the soldiers, or anybody else, in the incident.

Palestinian sources said the Palestinian, who is apparently a teenager, was taken prisoner near a bus station, close to the Nashash Gas station, south of Bethlehem.

In related news, the army also said that it is investigating another incident that took place after a Palestinian car swerved and crashed into a concrete wall, south of Jenin, in northern West Bank.

The army claims the car crashed near several soldiers, and that the military is investigating the incident, the Maan News Agency has reported.

An eyewitness said the Palestinian suffered mild injuries, and that, while he was turning, he was surprised by soldiers in the street, before his vehicle swerved off the road and crashed into a wall.