Another Journalist Among Many Palestinians Injured By Army Fire In Hebron 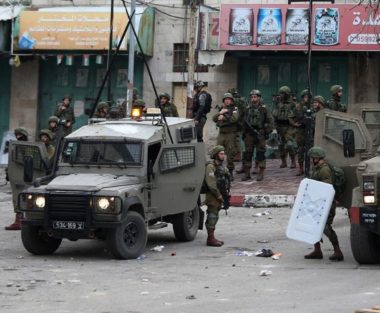 Palestinian medical sources in Hebron, in southern West Bank, has reported that Israeli soldiers injured, Sunday, many Palestinians, including a photojournalist, in the center of the city. He is the second to be injured by the army, in Hebron, Sunday.

Media sources said the soldiers resorted to the excessive use of force against dozens of Palestinian protesters in the center of Hebron city, and forced all shops in the area to close.

They added that the soldiers fired many rubber-coated steel bullets, gas bombs and concussion grenades at the protesters, in the Shuhada Street, while many local youngsters hurled stones at the military tower in that area.

Local medics rushed to the scene and provided the needed treatment to many Palestinians, including photojournalist Mashhour Wahwah.

In addition, many soldiers invaded Bab az-Zawiya area, in the center of Hebron city, and attacked several Palestinians.

Also Sunday, the soldiers attacked dozens of Palestinian protesters, wounding one journalist, identified as Abdul-Mohsin Shalalda, 27, with a rubber-coated steel bullet in the head, and causing many residents to suffer the effects of teargas inhalation.