Soldiers Shoot A Journalist In Hebron 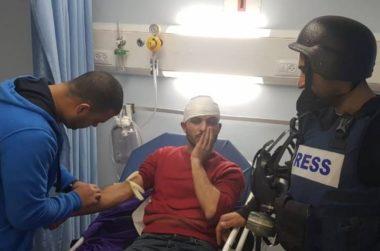 Israeli soldiers attacked, Sunday, dozens of Palestinian protesters with live rounds, rubber-coated steel bullets, gas bombs, and concussion grenades, wounding one journalist in the head, and causing many residents to suffer the effects of teargas inhalation, in Hebron, in southern West Bank.

Media sources said the soldiers attacked dozens of students of Hebron University, by firing many live rounds and rubber-coated steel bullets, in addition to a barrage of gas bombs.

The students were marching against the ongoing illegal Israeli occupation of Palestine and the so-called “Deal of the Century.”

They added that one journalist, identified as Abdul-Mohsin Shalalda, 27, was shot with a rubber-coated steel bullet in the head, and was rushed to the Al-Ahli Hospital in Hebron city.

Medical sources said the journalist suffered a fracture in his skull, and that he is currently in a stable condition.

They added that many Palestinians suffered the effects of teargas inhalation and received the needed treatment.