Soldiers Abduct A Palestinian, Search Many Homes, In Hebron 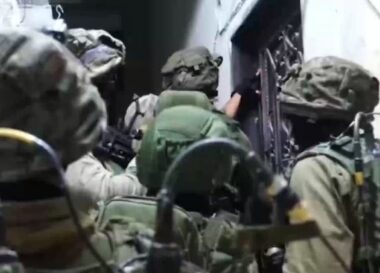 Israeli soldiers abducted, Sunday, a Palestinian, summoned another for interrogation and installed roadblocks, in Hebron governorate, in the southern part of the occupied West Bank.

They added that the soldiers invaded the Abu Hadid family home to abduct the father, Sa’id, but decided to detain his son after failing to locate him.

The soldiers also invaded the home of Ibrahim Kamel Amro, in Doura town, south of Hebron, in addition to many homes in Hebron city, and summoned one Palestinian, identified as Anas Hatem Qfeisha, for interrogation.

In addition, the soldiers installed roadblocks at the entrance of the al-Arroub refugee camp, Nabi Younis area north of Hebron, and Beit Awwa town, southwest of Hebron.

Many army jeeps also invaded Bani Neim town, east of Hebron, in addition to the ath-Thaheriyya and Yatta towns, south of Hebron.

The Israeli army claimed its soldiers managed to locate and confiscate many weapons and ammunition in the governorate.