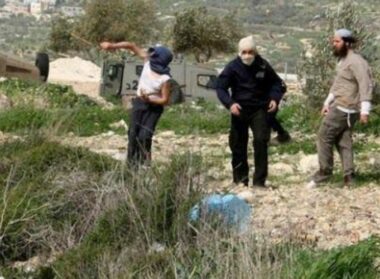 Rateb Jabour, the media coordinator of the National and Popular Committees against the Annexation Wall and Colonies in southern West Bank, said the colonists assaulted many Palestinians and prevented them from entering near lands in the ath-Tha’la area, east of Yatta town.

Jabour stated that the Palestinians are from the local Shawahin family, and added that the Israeli assailants also unleashed their dogs on the residents, and chased them out of their lands.

The attack is part of ongoing Israeli violations against the indigenous Palestinians, especially amidst the attempts to illegally occupy more lands to build or expand the colonies, built in direct violation of International Law and the Fourth Geneva Convention.