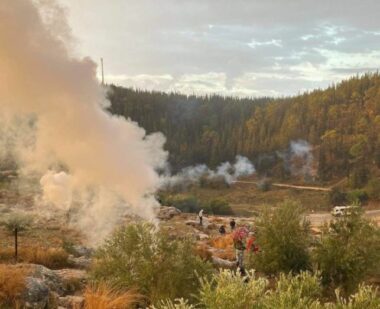 Israeli soldiers injured, Sunday, many Palestinian workers near the al-Midya village, west of the central West Bank city of Ramallah.

The head of Ni’lin village council, Emad al-Khawaja, told the WAFA Palestinian News Agency that the soldiers attacked the workers, who were trying to cross into Jerusalem through some of the gates of the Annexation Wall in the area.

Al-Khawaja added that the soldiers fired a barrage of gas bombs, and concussion grenades, causing many workers to suffer the effects of teargas inhalation.

On Saturday, November 7th, the soldiers shot a young man near the illegal Annexation Wall, close to Ya’bad town, southwest of the northern West Bank city of Jenin.

The attacks are part of ongoing Israeli violations against the Palestinians, especially day laborers, trying to cross into Jerusalem, specifically near the various gates of the illegal Annexation Wall in several parts of the West Bank.