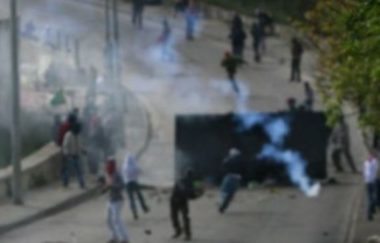 Israeli soldiers abducted, Thursday, a young Palestinian man, and caused dozens of residents to suffer the severe effects of teargas inhalation, in the al-‘Arroub refugee camp, north of Hebron, in the southern part of the occupied West Bank.

Media sources said the soldiers attacked many Palestinians, protesting the invasion near the main entrance of the refugee camp, and fired a barrage of gas bombs and concussion grenades at them.

They added that dozens of residents suffered the effects of teargas inhalation, and that the soldiers also abducted a young man, who remained unidentified at the time of this report.

In related news, the soldiers abducted five Palestinians in Hebron and Jenin, and seven in Ramallah, in the West Bank.

Late on Wednesday at night, the soldiers invaded Ein al-Baida’ village in the Northern Plains of the occupied West Bank, before storming and ransacking many homes.