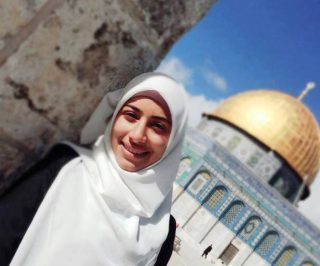 Update: The army released Aya Abu Naab, on Saturday evening, after issuing an order preventing her from enter Al-Aqsa Mosque, for one one.

The soldiers stopped the young woman, identified as Aya Abu Naab, 19, from Bab Hotta neighborhood, adjacent to the Al-Aqsa Mosque, in the Old City, and abducted her.

The young woman was cuffed before she was taken to a nearby interrogation facility.

It is worth mentioning that Aya was detained by the army three times over the last several years, and received various orders preventing her from entering the holy site.

She was placed on a “blacklist” preventing her from entering Al-Aqsa for life, for protesting ongoing invasions by soldiers and colonialist settlers, and their provocative tours, in the holy site.

Following her first abduction in 2016, she was interrogated and beaten by the soldiers, and received an order preventing her from entering Al-Aqsa for 15 days.

In related news, the soldiers invaded and searched many homes in Yatta town, south of the southern West Bank city of Hebron, causing property damage, and installed several roadblocks.

The soldiers also installed roadblocks at the main roads leading to Sa’ir and Halhoul towns, and at Hebron’s southern entrance, before stopping and searching dozens of cars, and interrogated several Palestinians while inspecting their ID cards.