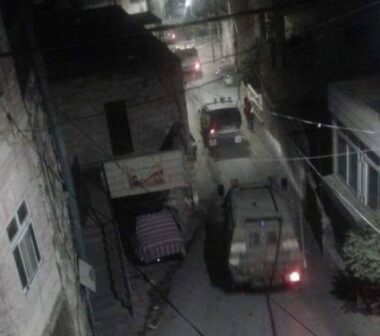 Israeli soldiers abducted, on Tuesday morning, eight Palestinians from their homes in several parts of the occupied Palestinian capital, Jerusalem.

In Biddu town and Beit Biddu village, northwest of Jerusalem, the soldiers abducted Yazan Issa Mansour, and Mohammad Mustafa Daoud, from their homes.

In Zaim town, east of Jerusalem, the soldiers abducted Mohammad Jaradat, from his home, while undercover officers kidnapped Ezzeddin Qabaja for posting a video of their invasion on social media.

The soldiers also invaded and ransacked many homes in the town, and interrogated the Palestinians while inspecting their ID cards, in addition to searching lands.