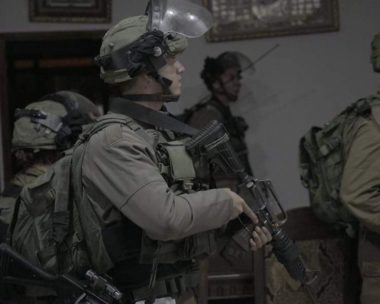 Israeli soldiers abducted, Sunday, at least five Palestinians, including a deaf young man who was also assaulted by the soldiers, in several parts of the occupied West Bank, the Palestinian Prisoners’ Society (PPS) has reported.

The PPS office in Hebron, in southern West Bank, said the soldiers invaded and searched homes in the governorate, and abducted M0ohannad Mahmoud Jaradat, 20, who is also a deaf young man, in addition to Hamza Mousa Darabea.

The PPS added that the soldiers assaulted Jaradat, causing cuts and bruises, before abducting him.

In addition, the soldiers invaded Hizma town, northeast of occupied Jerusalem, and abducted Ahmad ‘Ayed Salaheddin, in addition to Mousa Rajabi, who was taken prisoner after the soldiers stormed his home and work in Beit Hanina neighborhood, north of Jerusalem.