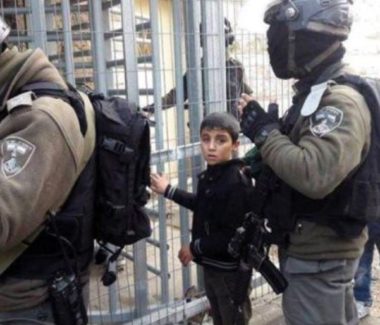 The Palestinian Detainee’s Committee has reported that Israeli soldiers have abducted, in March alone, at least 34 children, some of them were assaulted and tortured, in addition to imposing severe fines on them and their families.

The Committee stated that Israeli courts have imposed more than 37.000 Shekels on fines on the detained children, and added that they were moved to Ofer prison, near Ramallah in the occupied West Bank.

It said that the army abducted twenty Palestinian children from their homes, after the soldiers stormed and ransacked them, mainly during the night or at dawn, in addition to 11 children who were taken prisoner after being stopped by the soldiers in the streets, one who was abducted at a military roadblock, one for entering Jerusalem without a permit, and one after summoning him for interrogation.

One of the detained children was shot and injured by the soldiers prior to his abduction, and at several others who were repeatedly assaulted after their abduction and during interrogation.

Israeli courts also imposed prison sentences of 19 Palestinian children, for various periods ranging between 31 days and twelve months, in addition to Mustafa Abu Ghosh, who is held under arbitrary Administrative Detention orders without charges or trial.

The Committee added that Israel is holding captive 114 Palestinian children in Ofer prison and said that Israeli courts constantly impose high fines on the detained children, in addition to denying them basic rights.

Furthermore, the Committee stated that the children in Section 13 of Ofer prison started complaining from migraines after Israel installed signal jammers that apparently have high frequency.