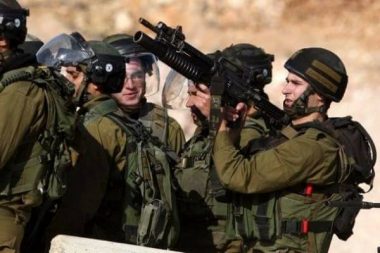 Israeli soldiers abducted, earlier Wednesday, four Palestinians from their homes in the Hebron governorate, in the southern part of the occupied West Bank.

Media sources in Hebron said the soldiers stormed and violently searched dozens of homes in the city, and nearby towns of Doura, Beit Awwa, ath-Thaheriyya, as-Sammoa’ and Ethna.

During the violent searches, the soldiers interrogated many Palestinians while inspecting their ID cards.

The soldiers then abducted Anas Ahmad al-Awwadi, 20, from Ethna, Wael Abdul-Mo’ti al-Fakhouri and his son Ibrahim, from Hebron city, in addition to Mohammad Yousef al-Qaisiyya, 25, from ath-Thaheriyya.

In related news, the soldiers abducted three Palestinians, including one journalist, in Nablus and Ramallah.