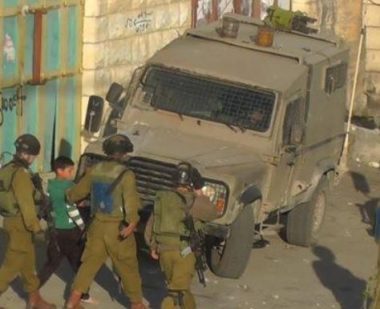 The Palestinian Prisoners’ Society (PPS) has reported that Israeli soldiers abducted, on Wednesday at dawn, three Palestinians, including one journalist, in Nablus and Ramallah, and injured several others in Hebron.

It added that the soldiers abducted a young man after undercover officers infiltrated into the town driving a truck used for selling fruits and vegetables, before breaking into his home.

It is worth mentioning that Adham’s brother, Sami, is held by Israel without charges or trial after receiving four consecutive arbitrary Administrative Detention orders.

In addition, the soldiers invaded Zawata village, west of the northern West Bank city of Nablus, and abducted a journalist working for a local radio station, identified as Mohammad Anwar Mona, after storming his home and searching it.

His abduction brings the number of Palestinian journalists imprisoned by Israel, to 30, the Palestinian Detainees’ Committee has confirmed.

The soldiers also invaded Beit Iba town, northwest of Nablus, and abducted a young man, identified as Anwar Taleb Sanallah, after invading his home and violently searching it.

Late on Tuesday at night, the soldiers invaded Abu Sneina neighborhood, in Hebron city, in the southern part of the West Bank, and fired gas bombs and concussion grenades at local protesters, causing many Palestinians to suffer the effects of teargas inhalation.