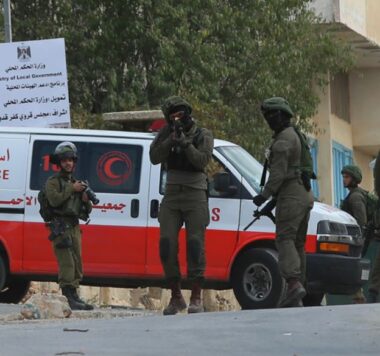 Israeli soldiers invaded, Sunday, the towns of Hizma, al-‘Isawiya and the at-Tour, in occupied Jerusalem, abducted four Palestinians from their homes, and shot one.

Media sources said the soldiers invaded and ransacked many Palestinian homes in al-‘Isawiya and at-Tour, before abducting four Palestinians.

The soldiers also invaded Hizma town, northeast of Jerusalem, and attacked many Palestinians who protested the invasion, before shooting a young man, 18 years of age, with a live round in the thigh.

On Saturday, the soldiers invaded Silwad town, east of the central West Bank city of Ramallah, and attack with gas bombs and concussion grenades, dozens of youngsters who protested the invasion and hurled stones at the army jeeps.