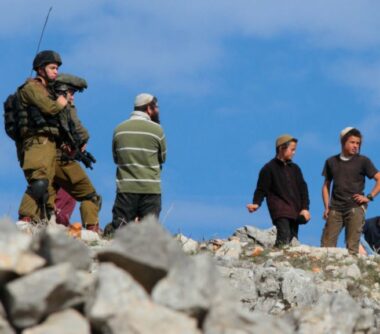 Fuad al-‘Amour, a nonviolent activist and a member of the local Protection and Steadfastness Committees in southern Hebron, said the colonists came from the illegal Havat Ma’on colony, which was built on stolen Palestinian lands.

Al-‘Amour added that the colonists hurled stones at a few homes before the locals chased them away.

It is worth mentioning that at-Tiwana is one of the dozens of Palestinian communities that have lately witnessed a serious escalation of violations by the colonists and the army.

Besides causing property damage, a recent led to the injury to a man and his wife, in addition to causing damage to their car, while tending to their land in Masafer Yatta area.

In addition, several colonists assaulted a Palestinian family while tending to their land in the South Hebron Hills.

In related news, a group of colonists attacked many homes, on Saturday at dawn, in Huwwara town, south of the northern West Bank city of Nablus.

Furthermore, a group of armed Israeli paramilitary colonial settlers from the illegal colony “Givat Ronin” attacked Palestinian homes on the edge of the village Burin, southwest of Nablus.