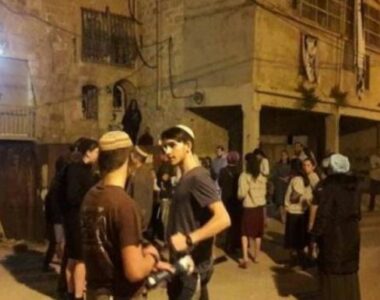 A group of extremist Israeli colonists, illegally squatting on Palestinian lands near Huwwara town, south of the northern West Bank city of Nablus, attacked many homes, on Saturday at dawn, and hurled stones at them.

Ghassan Daghlas, a Palestinian official who monitors Israel’s illegal colonialist activities in northern West Bank, said the colonists came from Yitzhar colony, which was built on stolen Palestinian lands, and infiltrated into western parts of Huwwara.

Daghlas added that the colonists hurled stones at several Palestinian homes while the families slept, leading to damage, especially to windows, in addition to causing many children to suffer panic attacks.

Local Palestinians then chased the invaded colonists, who fled to Yitzhar before the soldiers invaded the town.