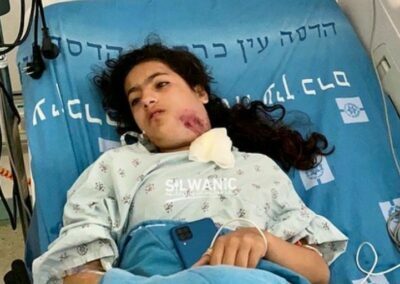 On Monday night, Israeli soldiers injured dozens of Palestinians, including children, and abducted many others after the army and the police assaulted the Palestinians In Bab al-Amoud, in the occupied capital Jerusalem.

The Wadi Hilweh Information Center In Silwan (Silwanic) said hundreds of Palestinians were celebrating the Al-Isra’ and Al-Mi’raj Muslim holiday before the soldiers and the police attacked them to force them to leave.

Silwanic said the attacks started in the evening hours on Monday when the families, including many children, were celebrating in the area before the soldiers and the police assaulted dozens and started firing gas bombs and concussion grenades at them.

It said hundreds of Palestinians came from several parts of occupied Palestine to pray in Al-Aqsa Mosque and were trying to reach the holy site through the various gates of the Old City before the army and the police attacked them.

When the Israeli attacks started, many families were separated from each other, children screaming and crying while their families looked for them amidst smoke from the gas bombs and concussion grenades.

The mounted police also chased dozens of Palestinians while the soldiers assaulted them with batons and pepper spray.

The Palestinian Red Crescent Society (PRCS) said its medics provided treatment to more than 37 Palestinians, including eight who were rushed to hospitals.

Among the wounded was a newborn, only six months of age, who was injured in the face from the shrapnel of a concision grenade, in addition to a physically challenged child who was wounded in the face.

Silwanic said the child, Munawar Burqan, 11, suffered a jaw fracture, severe cuts, and bruises to the face before she was rushed to Hadassah Hospital, where she was admitted to surgery.

Silwanic also said that the soldiers abducted dozens of Palestinian, primarily teenagers, and took them to interrogation facilities.