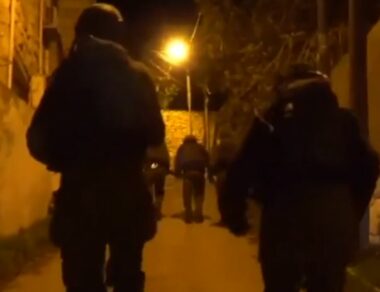 Israeli soldiers invaded, Tuesday, many Palestinian homes in several parts of the occupied West Bank, including Jerusalem, searched and ransacked many homes before abducting nine Palestinians, including former political prisoners, the Palestinian Prisoners’ Society (PPS) has reported. The soldiers also handed warrants halting the construction of homes, north of Jerusalem.

The PPS office in Tulkarem, in northern West Bank, has reported that the soldiers abducted Haitham Mer’ey Shehada, 34, and Saif Hifthi Abu Libda, 27, after invading their homes and searching them.

In addition, the soldiers abducted a child, identified as Wadea’ Monther Ra’ey, 13, in addition to Jamal al-Jondi, from the al-‘Arroub refugee camp, north of the southern West Bank city of Hebron, while Abdullah Abu Sneina, was abducted in Hebron city.

The soldiers also invaded and ransacked homes in the city, causing damage; owners of some of the homes have been identified a Najib D’eis, Samah D’eis, and Abu Mustafa ad-Damiri, in addition to installing roadblocks in Halhoul Bridge area, the entrance of the al-Fawwar refugee camp, in the northern and southern parts of Hebron, before stopping and searching many homes, and interrogated the residents while inspecting their ID cards.

In Jericho Palestinian city, in northeastern West Bank, the soldiers invaded and searched homes in the center of the city, and abducted a college student, identified as Suleiman Khalaf Nawaj’a, 21.

Furthermore, the soldiers invaded Qalandia, north of occupied Jerusalem, and handed warrants halting the construction of three homes in addition to dozens of structures, including walls and storage facilities.