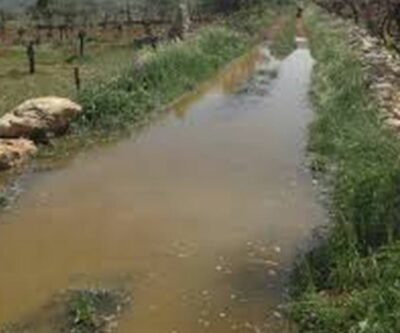 Illegal Israeli colonists invaded, Tuesday and Monday, Palestinian farmlands, and olive orchards, north and east of the northern West Bank city of Nablus, and flooded them, with sewage water, in addition to attacking the villagers.

Azem added that the colonists flooded with sewage water Palestinian lands containing olive and apricot trees, in the western area of the town, causing serious losses to the livelihoods of the farmers and their families.

Also on Tuesday, a group of colonists from the illegal Elon Moreh colony, northeast of Nablus, attacked Palestinian olive orchards and assaulted the residents while picking their trees in Khallet al-Jaghoub area, east of Deir al-Hatab village,  before more Palestinians rushed to the area and forced the assailants away.

On Monday, the colonists invaded olive orchards in Deir al-Hatab village, east of Nablus, and flooded them with wastewater, in addition to attacking the villagers.

The Israeli assailants, from the illegal Elon Moreh colony, channeled the sewer water into the orchards to flood and sabotage them, in order to prevent their owners from picking their olive trees during the current harvest season.

While the illegal colonists constantly attack the Palestinians, their homes and property, their farmlands, and even holy sites and graveyards, these violations always witness a serious escalation during the olive harvest season.

On Monday at night, several fanatic Israeli colonists installed a barn near the illegal Maskiot colony, which was built on stolen Palestinian lands in the Northern Plains and brought many cows.