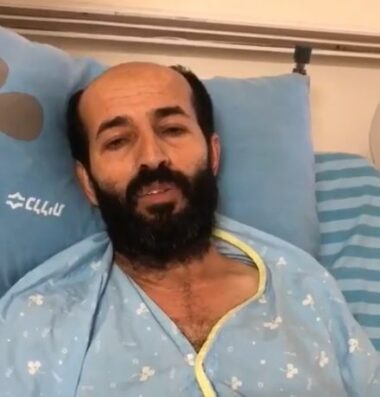 Four human rights groups, on Tuesday, called on the Israeli occupation to release the administrative detainee, Maher al-Akhras, who has continued his hunger strike for 86 days, the Palestinian WAFA News Agency reported.

Al-Akhras, 49, from Jenin, is a husband and father of six, who was detained by the Israeli forces without charges, and held without trial. He began his hunger strike immediately after he was detained, on July 27, 2020, and is currently confined to a hospital bed in Israel’s Kaplan hospital.

A Physicians for Human Rights Israel (PHRI) volunteer recently visited al-Akhras and warned that the usually alert man is now having periods of confusion, and severe dizziness. The ailing detainee also complained of extreme chest pain, loss of hearing and vision, and is too weak to move or sit up in bed.

“We call on the international community to urge Israel to allow Maher al-Akhras to, at the very least, move to a hospital in the West Bank, so he may be treated by a medical team in which he has trust or release al-Akhras immediately before it is too late. We urge the international community to voice their grave concern and call on Israel to stop the continuous and systematic human rights violations of Palestinian prisoners.”

The Prisoners’ Media Office warned in a press release, Monday, that the health of the hunger striker al-Akhras, is at a dangerous stage.

It stated that after forty days of hunger strike, continuous tissue damage and multiple organ failure is possible, and can damage these organs and cause death.

After sixty days of hunger strike, the vital organs enter a dangerous stage, when the function of the heart and kidneys are severely compromised, posing a serious risk of imminent death.

According to the Palestinian Prisoners’ Society (PPS), the Israeli occupation, Monday, refused the ailing detainee’s request to be transferred to a Palestinian hospital in Jerusalem.

It added that the 60 prisoners recently declared an open hunger strike in solidarity with Maher al-Akhras.