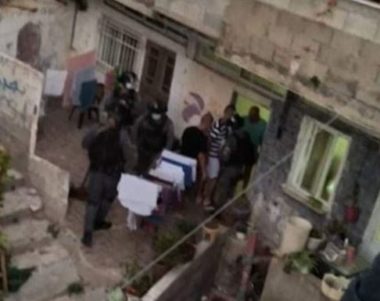 Israeli soldiers abducted, on Wednesday at dawn, five children, in addition to a mother and her son, in Silwan town, south of the Al-Aqsa Mosque, in occupied East Jerusalem.

The Wadi Hilweh Information Center in Silwan (Silwanic) has reported that the soldiers stormed and ransacked many homes in the town, and interrogated the Palestinians.

Furthermore, the soldiers Eman al-A’war, the mother of detainee Mohammad al-A’war, who has been imprisoned by Israeli since 2018, in addition to her other son, Jibreel.

It is worth mentioning that Eman was about to head to the Negev Desert Detention Camp to visit her imprisoned son, Mohammad, for the first time in four months after Israel suspended all visitations.

Her husband was taken prisoner three weeks ago, and remains under interrogation, held in a cell in the al-Maskobiyya interrogation facility in Jerusalem.